Dear All,
I am happy to invite all of you to the sixth event of the Seminar Series in the Monsoon Semester at the School of Human Ecology (SHE).

About the Talk A new ‘normal’ defines coral reefs today, one that is characterised by human-induced rapid environmental change (HIREC), and in which large-scale habitat degradation from climate change is radically altering ecosystems. HIREC is exposing species to novel circumstances or chronic conditions that are above the baseline typical of natural environmental variations and is testing their coping abilities. To persist in these conditions, individuals, populations and species need rapid adaptive responses. Groups of species with generalist traits, ‘fast’ life histories and behavioural flexibility are typically being favoured over others. As a result, HIREC is polarising coral reef communities into winners and losers. While there may be ‘winners’, are they able to perform the functional roles once played by the ‘losers’ in these systems? There is a growing consensus that HIREC is eroding not only species, but also functional diversity with dramatic consequences for ecosystem function. Through this talk, we will explore how HIREC, in the form of coral mass-bleaching degradation, influences the structure and function of coral reef fish assemblages in the Lakshadweep Archipelago. I will focus on a guild of benthically associated predatory fish that are particularly vulnerable to coral degradation. They are commercially important food fish that support the lives and livelihoods of local communities and play vital ecological functions on coral reefs. Against a backdrop of rapidly degrading coral reefs in the Lakshadweep, I explore who the winning (and losing) species are, where they are found and how they cope with reef degradation. I will also discuss what fish community shifts mean for ecosystem function and services in the Lakshadweep Archipelago.

About the Speaker
Dr Karkarey is a marine biologist interested in the impacts of rapid environmental change on coral reef fish. She studies the role of animal behaviour and species interactions in mediating the impacts of environmental change on biodiversity and the functioning of coral reef ecosystems. Her work has been based in the Lakshadweep Archipelago in India. She pursued her PhD at the Manipal Academy of Higher Education (MAHE) and the Nature Conservation Foundation, Mysore in 2018, after which she was a DBT - Research Associate at the National Centre for Biological Sciences, Bangalore. Currently, Dr Karkarey is a Royal Society Newton – SERB International Fellow at the Lancaster Environmental Centre, Lancaster University, UK.
For queries, write to us at sheconference@aud.ac.in 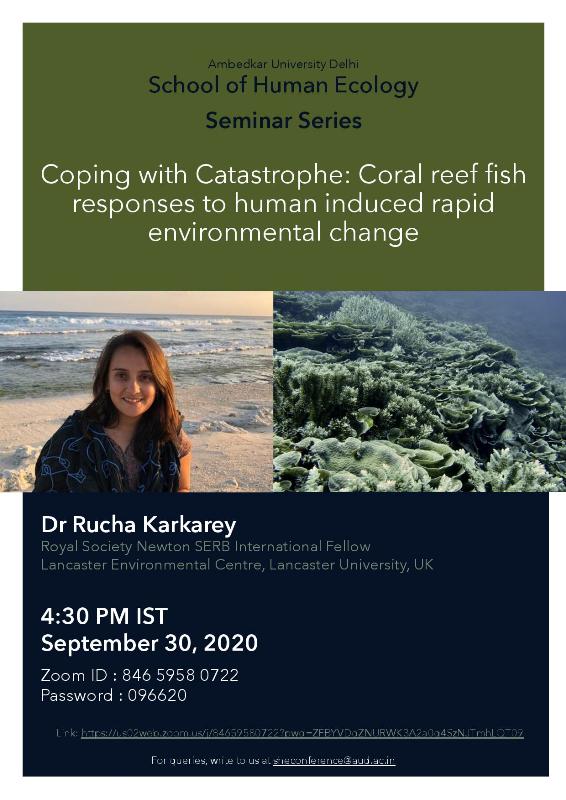